Hello crafters and Happy Monday! Have you tried out the Zig Clean Color FELT brush markers yet? Well if you haven’t, then you’ll want to check out today’s video that I created for Simon Says Stamp, because I am going to demonstrate the felt brush markers for you! I’ll also show you some of the differences between these and the REAL BRUSH Clean Color markers we all know and love. Because each of these have their own brush type, this means there are some differences between the two markers. I also find that each marker performs certain techniques better. We are going to dive into all of this in the post and the video below.

Note: In all examples, I used Strathmore Bristol Smooth paper for my coloring. Most people – myself included – get great results when using Zig Markers with this paper. Both markers have their corresponding ink color marked on the bottoms; this is another great reference feature.

My initial curiosity when first trying out these markers was would they both act the same when used on paper or would there be distinct differences between them? The answer is somewhere in the middle… while there are certain aspects about these markers that are similar, there are other areas in which the markers behave different from the other.

One big difference is how they react when used as a watercolor medium applied directly to paper. The Real Brush markers blend with even just a small amount of water almost instantly. The Felt markers however take a bit more water and/or effort to get them to blend. I believe this has a lot to do with the make up of the inks themselves.

That said, you can still get watercolor effects with both, as demonstrated in the photo above. When applied directly to paper, I feel you get best results with the Real Brush markers. The Felt brush markers – when applied direct to paper – seem to dry faster.

When applying the Felt brush markers to a slick surface, picking up the pigment with a water brush and applying the ink-coated paintbrush onto paper, you get better watercolor results. When Real Brush markers are applied to a slick surface and you pick up the pigment, the colors are much less saturated and not as intense. This method allows you to have better control of the intensity of the Felt brush marker’s pigment, as seen in the photo below. In this example I applied some pink Felt brush marker onto a palette; I then used a strong amount of pigment to paint the top swatch of color. The next two swatches have more water gradually added to the pigment on my palette. As you can see, the results got lighter the more water I added to the pigment. This is where I find the Felt brush markers shine when used as a watercolor. With the Real Brush markers, most everyone colors onto the paper and blends out with water for a watercolor effect. The Felt brush markers of course produce this same effect but you also have the ability to color layer them as well.

The only trick to color layering with the Felt brush markers is that you need to let areas dry after they’ve had a good amount of ink already applied. The Felt brush markers have a tendency to pill the paper if you overwork an area too quickly. But the results of the color layering look great if done with care, as seen in the airplane example above (see the middle airplane on the left).

I colored this airplane with two shades of each Felt tip marker and you can see I got pretty smooth results. Again, I made sure not to overwork any areas. If I were going to need to go back over an area, I would wait until the first layer had a chance to dry for a few minutes before going back in with more color. Another fun aspect about both markers is that they react to water beautifully when adding splatters over top. In the example above, I colored each image with one single color of the Felt brush markers and then added water splatters. The result leaves a great variegated finish to the coloring, and you almost can’t even tell that just one marker color was used on each image!

You can also create vivid backgrounds with both of these markers. Because most of you have already seen the Real Brush markers in action, the next example below was done with the Felt brush markers. I scribbled three areas of color onto the paper and then used a wet brush to blend the colors together. Again, because this was done with the Felt brush markers, I used quite a bit of water to get the blended results, but you can see that the intensity of the color stayed intact. Isn’t the color blending gorgeous!? Be sure to check out the video below to see these markers in action and watch the demonstrations of everything I talked about! I hope today’s post and video helps you to decide if you need to add one or both of these markers to your crafty-stash; I had a lot of fun experimenting with these new Felt brush markers and I think you will too!

Thanks for stopping by today; I will be seeing you again very soon with a new video tutorial! 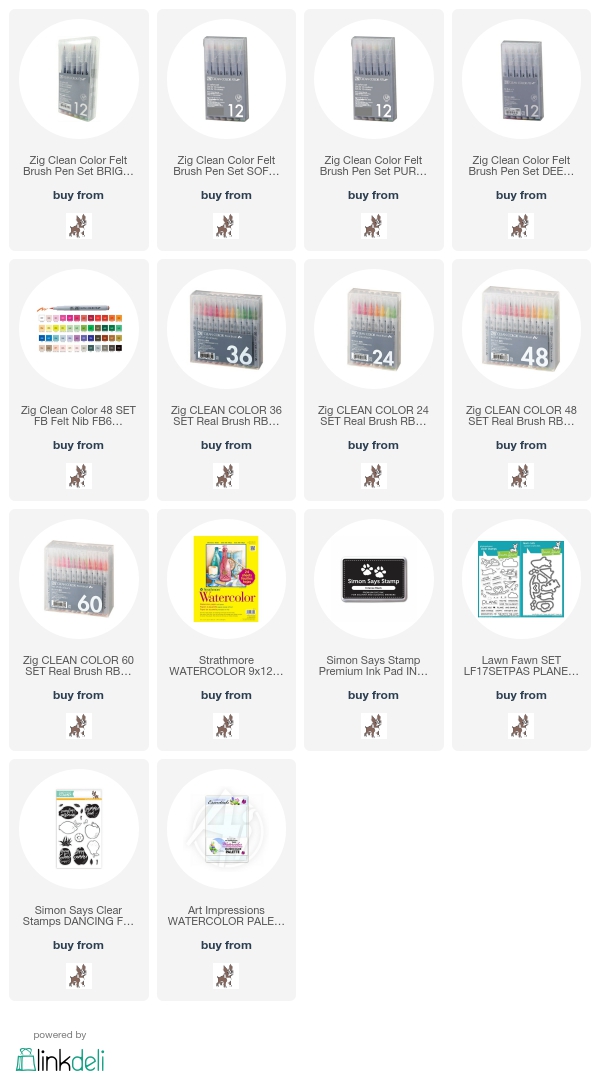