Today I was doing some Copic coloring and created this fun little scene using the Avery Elle Storybook stamp set. One of my fellow crafters, Sandy Allnock, always creates such gorgeous scenes in her cards, and I thought it would be fun to do some “drawing” with my Copics instead of the pen and ink drawing I usually do!

I started off by stamping the deer, butterflies and grass images from the stamp set onto my cardstock panel in Memento black ink. On a separate piece of cardstock, I stamped the deer and butterflies once more, as I was not going to be coloring those images on the background panel; they were my “placeholders” and instead, I was going to be doing some fussy cutting and paper piecing later on with the ones stamped on the separate cardstock.

Using a variety of greens, browns and grays, I created the little forest scene around my images on my main panel with my Copic markers. I got a little too dark on the shadow beneath the deer… but c’est la vie! It didn’t turn out too bad all in all. :)

Once my background scene was colored I then colored the butterflies and deer on the other piece of cardstock, fussy cut them all out, and adhered them over the image “placeholders” on my scene. With a scoring board, I scored a double frame around the edges of the panel, and paper pierced a border inside the two frames. I then layered the panel onto some scalloped cardstock and my kraft card base.

Finally, for a few finishing touches, I added some Wink of Stella glitter to the butterflies, and some white dot details to parts of the scene and images. I also tied a golden yellow ribbon around the bottom of the card to “tie” it all together!

I had a ton of fun creating my little scene for this cute deer image and I hope that you too have enjoyed! Thanks so much for stopping by!

This card is submitted into the Avery Elle I ♥ U challenge #24 “Spring”, the Virginia’s View Challenge #14 “Layers and Dimension”, and the Simon Says Stamp Work It Wednesday April 2015, 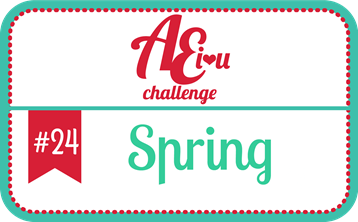